You are here:
Coping with changeFundraisingMental Health 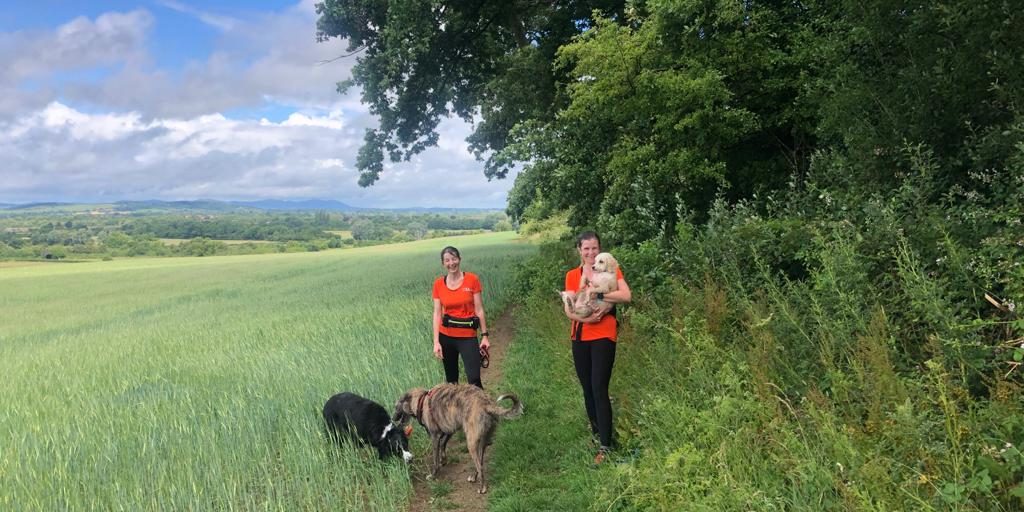 It’s been quite a year for TIC+ team members Claire and Deb. In an ambitious effort to raise money for TIC+’s 25th anniversary, these two incredible ladies have run a whopping 25 marathons each. That’s 50 marathons between them. This probably more than any professional athlete. Their achievement is quite simply unbelievable, and so far they’ve raised over £1,500. But how are they feeling now?

How do you feel, 25 marathons later?

Claire: I’m so proud of Deb and I for wearing and running our orange t-shirts for 655 miles (more in the case of Deb, who is now officially a running legend!). Although I have been running on and off for twenty years, I have never done anything that has required QUITE so much commitment! It was fantastic to do my last run with Deb and our dogs, even though the rain was coming down like stair rods; I’m so lucky to have been able to do this challenge with a friend by my side.

Deb: I feel so proud of Claire and I for what we have achieved. It’s been a challenging year for me in some ways but running has been the one constant, keeping me going. I’m really happy that doing something I love has raised money to help support young people who are going through difficult times.

What was the highlight of this challenge?

Deb: I have so many highlights of the past running year. One is personal – I smashed my Half Marathon PB by 20 minutes – but without a doubt the best parts were my running buddies (especially Mrs PB) who kept me going wind, rain or shine. Claire ran beside me even when I got covered in slurry and was making myself feel sick with the smell! She even helped me wash off at an outside tap in a churchyard at the top of a hill in Churchdown. That’s real friendship! I have been supported by local running and fitness clubs; one of which –  infinite Balance – organised a charity 5/10k Walk, Run or Scoot to raise funds for us just before lockdown.

Claire: Gosh, so many! Running in the Cheltenham half with our amazing team and then seeing a huge wall of orange from our voluncheers at 9 miles was really moving, especially at some people there had never run before, but they had entered and done all that  training to run for TIC+ just because they believe in the work we do. Really humbling to run alongside them. Other special moments though are running at dawn over the hills with my dogs before work and seeing the sun coming up, just beautiful! I’ve been really lucky in that I’ve had so many people willing to run with and support me through this. Some of those runs have been very special and we’ve really talked and shared – some great friendships born through this

When did you most feel like giving up? How did you motivate yourself again?

Claire: There have been some tough times in the last few months – especially when I lost my best friend and my dad within four weeks of each other. Sandra and I had always run together- in fact for my 40th she bought me a ten mile off-road race entry (a girl who knew the way to my heart!), so when she died after a long illness, so much of the joy I felt when running just faded. It was compounded when dad died just weeks later because the person I would have turned to wasn’t there. In fact, I wasn’t sure I could run again and almost left it too late to finish the challenge.

I was able to keep going principally because of my faith, a faith Sandra and I shared, and the certainty that she has now been fully healed. We talked and cried about her illness and terminal prognosis and ended up laughing that even in dying, it was just another finish line she would get to before me.

So, although it’s been really hard running, knowing that Sandra and I will never run again together in this life, I’ve been able to run for her and for me and just be happy that I knew someone who had such an impact on me and others. Amazingly understanding friends have helped me through the last miles and kept my spirits up though losing dad, too.

Deb: When lockdown was announced it was hard to imagine how I was going to hit my running target of around 14 miles a week. We were only allowed to go out once a day for exercise, and this had to include walking my two dogs and making sure the children had some exercise. Having got used to chatty runs, running with neighbours, friends and running club mates, it was so difficult to motivate myself to get up and run solo. Strangely it was the commitment I made to the challenge that kept me running and as long as I kept running I felt I had some control in a difficult time. In the quiet of the lockdown, wildlife also became really bold. On one run I followed a deer who was ambling up Crippets Lane towards Leckhampton Hill – such a special sight.

Will you be picking up your running shoes again anytime soon?

Deb: My current running shoes have had it! I worked out I have run over 800 miles in them so I need new ones- that’s my reward! I have said I’m going to take a break and give my legs a rest for a couple of weeks but I’m already getting twitchy! It’s really nice to do some lovely trail runs with Elsa my dog, chatty runs and before-everyone-else-is-up runs without worrying about the mileage!

Claire: Hmmmmm! Well maybe not for a challenge like this- but I do love a daft idea so I can see a few mud runs, half marathons etc in my future. I’m hoping Deb and I are able to keep up the discipline for meeting for chatty runs, although she’s quite speedy! First things first though are some much needed new trainers. I may keep the t-shirt… I’ve become strangely fond of orange

We couldn’t be prouder of our golden girls. Their efforts to fundraise for TIC+ are outstanding. We wish them a well-deserved recovery!

You can still support their fundraising target by donating via either of their JustGiving pages below:

TIC+ works hard at raising funds so they can arrange for a counsellor to see you for free, all you need to do is call us on 01594 372777 or text us on 07520 634063 to arrange an appointment. We know it can be hard to take that first step but, like the other young people we’ve helped, you’ll be so glad you did.

Coping with self-harm: A Guide for Parents and Carers
30th October 2020

THE EASING OF LOCKDOWN – WHAT DOES THIS MEAN AND WHAT CAN WE DO TO MANAGE IT?
11th August 2020

Reflections on Lockdown
19th May 2020

Well-being packs for children
7th May 2020
A list of quick reference organisations, websites, helplines and apps which may help in a crisis situation.